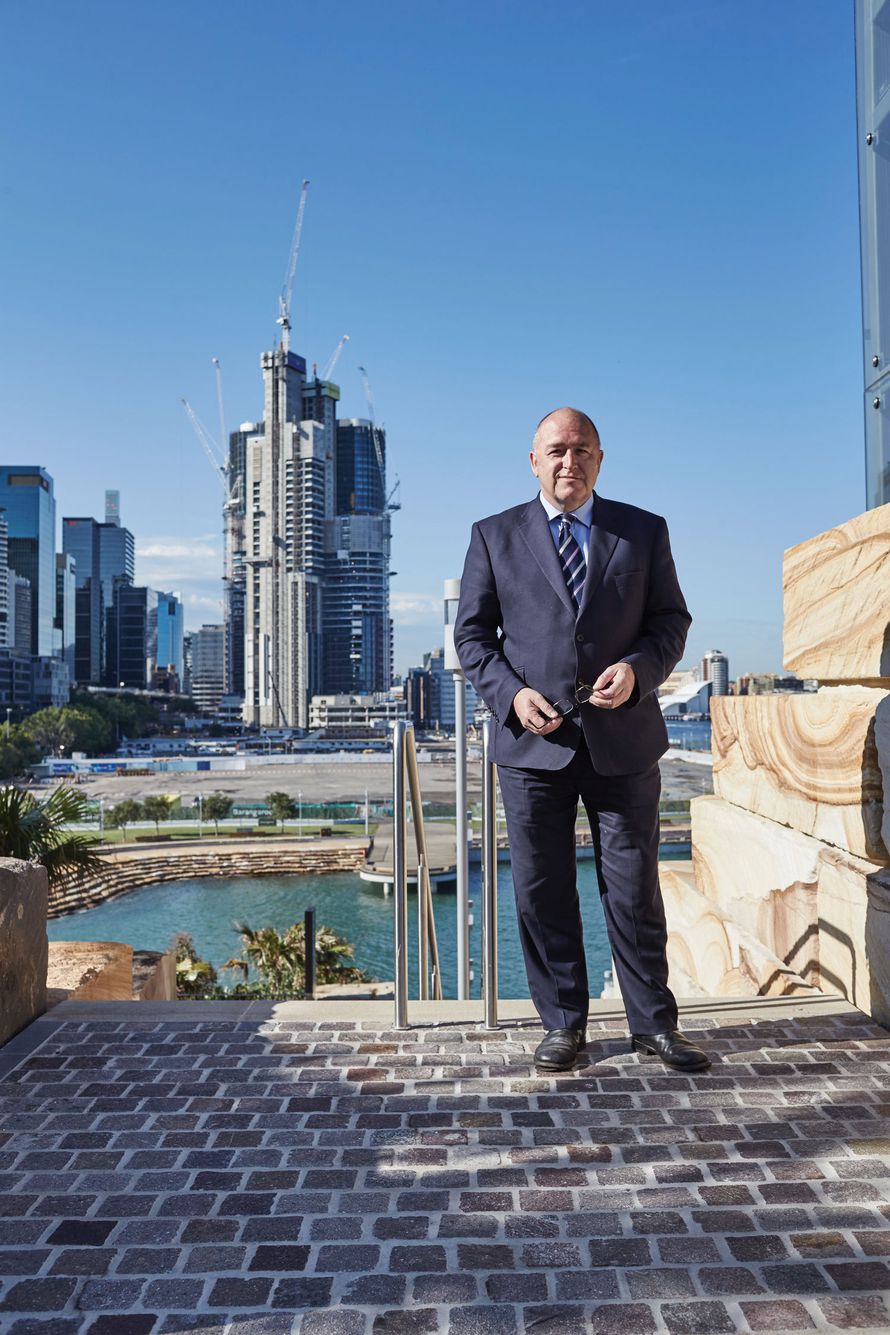 What is the future of urbanisation, and where will this journey take us?

Carlo Giannasca, Head of Urbanite, chats with the Chief Executive Officer of the Committee for Sydney, Dr. Tim Williams.

Dr. Tim Williams: Let me tell you first why I’m interested in cities. I come from a public housing estate in Wales in a small mining community. My imagination was always stirred by cities and I was determined to live in one. Of course the one I ended up visiting and living in first was London, and I helped shape East London over about 10 years of work.

I remember reading a great phrase German cities used in the Medieval period. They called it the Hanseatic League, and the idea was you’d go to one of these cities to escape the boredom and oppression of the countryside. And there was a slogan over some of these German cities: ‘Stadtluft macht frei’, which means ‘City air makes you free’.

But now, some people have terrible ideas about cities, that they’re too chaotic and there’s no community—when actually it’s the opposite. Cities create communities. They are where creativity exists and flourishes. They are where knowledge is created. They are where the most exciting lifestyles are available to people. They are where people go to get the resources and instruments for choice. So, from my point of view, cities are an incredibly liberating force, and I’ve always been excited by them.

I spent about 25 years living and working in the world’s most diverse cities. I’ve always been enthusiastic about what cities can do for human freedom.

Carlo Giannasca: How do you think we can communicate the identity and feeling of a place before it’s been built?

TW: Well that’s always the paradox. Often we think of cities as places of human isolation where you don’t know your neighbour. But actually, people are ‘Londoners’ or ‘Sydney-siders’ or ‘New Yorkers’ or ‘Melbourne-ites’. These are more real identities than many other places, and they are unifying identities in the sense that you know what London is, and what it was before visiting. Cities are incredibly powerful brands, and they are becoming increasing powerful in the history of humanity.

CG: Was there ever an option for them to become less important?

TW: Well yes, there was a time in the 50’s and 60’s internationally, where the city centres were evacuated and the inner-city was associated with decline and poverty. Cities were run down until the 90’s. Cities suffered from an image problem after World War II. Now we are seeing the global recovery of cities, the re-urbanisation of the economy where companies make a point of associating themselves or aligning themselves with the equity of the city they’re based in. Cities and companies are coming together again in an incredibly powerful way.

CG: I think design plays a huge role here given that anything man-made is designed. How critical do you think it is to get that design right? I mean, the Committee for Sydney is obviously visionary, and has an enormous role to play in strategically planning the future, and shaping the future of Sydney.

TW: It’s absolutely essential. If cities are rebuilding and renewing everywhere, and we are experiencing an urban population explosion, then it matters how we manage and design our cities. It matters that we do density well, which means that we should be well connected, have great amenities, great lifestyle and jobs within living distance. So actually, the design requirement of city-making is more important now than ever. We are obligated to do it well.

CG: And it’s far more competitive too. Cities are competing more and more with each other.

TW: Absolutely. Cities are trading on their success as managers and designers of their places. We have a mantra for the Committee of Sydney, that cities collaborate to compete across public and private sectors, between governments and the community. But people will not buy into the growth or be attracted to places that are not designed well. The principles of urban design are critical to the success of any city.

CG: We agree, it’s so critical to get it right. But what happens when you get it wrong? Look at George Street [Sydney CBD Tram proposal] What if that turns out to be a disaster?

TW: I happen to think that it won’t be a disaster but I can tell you that we have made urban errors in the past, which have deterred people from accepting urban growth. Sydney is forecast to grow from four million to eight million in 40 years time. So, we can either carry on sprawling outwards with un-distinguished development, buildings and town centres, or we can go upwards and actually create the kind of modern, high-density, well-connected, amenity-rich environments that people are looking for. Design thinking will be at the heart of that challenge.

CG: What is four-to-eight million going to look like?

TW: And ‘who’ they will be is the other interesting thing. Smaller families—people are having 1.8 children instead of 2.5 children and people are marrying later. Sydney as an example, will be more of an Asian city than it is today. Already it’s becoming one. Six-of-seven local councils already have a majority of people who come from an Asian background indicating that Asian cultural influences will have an important impact on the design principles of the city.

CG: Do you think that design in Sydney needs to be driven more by its new Asian inhabitants, or do we need to stick to those traditional, authentic Australian principles?

TW: That’s a really powerful question. If we stick to the current design values introduced in the 50s, then we will have a city that will sprawl beyond the Blue Mountains. From what we are seeing, we realise we can’t really do that. So in a sense, Sydney will become much less of a suburban city and much more of an urban city—and therefore to some degree, more of an Asian city. Sydney may become an interesting cross between some of the European models of a more dense, more compact city with some of the high-rise elements of an Asian city, but in the context of something like an American city that was once sprawled and is now trying to make itself more compact.

The best places are the ones where the designers work long-term, where city planners, urban designers, and where the private and public sector work together with a long-term interest. And we are starting to learn the economic value of well-managed places.

The knowledge economy is actually a very interesting paradox. We used to think that the knowledge economy and new technology would lead to de-centralisation and therefore, growth away from cities, but we are discovering now that with more value placed on knowledge, this has attracted people that want to live and work around knowledge-based environments. This means we are in fact getting higher concentrations of economic activity in the knowledge economy.

Designing a high-density, highly- globalised city of the future is a long-term direction for the city of Sydney. We’ve started on the journey. We need to work collaboratively and stick to that vision, and we need to excite people about what such a city can offer. I think we’re on the edge of a great choice for Sydney; between a city that is already good, but that can choose to be great because it’s experiencing economic momentum.

CG: We remember you sharing a white paper with us on Sydney being the creative capital of Australia—which isn’t that difficult a claim—and also becoming the kind of Silicon Valley; the technology hub of Australia.

Designing a high-density, highly globalised city of the future is a long-term direction for the city of sydney

TW: Well, this is the critical part of the discussion. People need to understand that Silicon Valley is no longer working as an attractor of talent to live there. The creatives are now living in San Francisco. Sydney needs to understand the same thing—that innovation and urbanism go together; we need to design a partnership between the two so that innovation flourishes and exists in certain places.

We used to think innovation was purely about clever people who would go to a campus on the edge of the city and think beautiful thoughts—but they don’t want to do that, now. The talented people want to live in beautiful, well-connected, mixed-use places where there are cafés, bars and restaurants—which have become the factories of great ideas in the modern knowledge economy. They want places where they can pop-out at lunchtime and have a life. They want to be able to cycle and walk to work, rather than drive an hour-and-a-half, which is completely wasteful. People want to be on public transport and be on their iPad at 7:30am having worked an hour and half before they get into work, or socialise.

Sydney has a great natural attraction for people, and all these things are taking place within the geography of Sydney. We need to nurture the very places that are creating the economic future of Australia by employing good design principles.

I think the most important thing in making a city great in a broader sense, is that it’s a city for all.